I know that most people love cinnamon but I think that it is underused in most recipes. Most 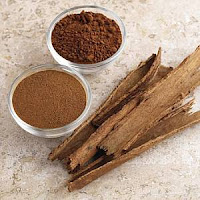 recipes call for maybe a teaspoon or even less. Forget it. I say add a tablespoon. I add it to as many recipes that make sense! For example, if I am making a pie crust with a gingersnap crust I add lots of extra cinnamon. If I am making applesauce you better believe that I am going to add more than a pinch. And I add it to baby carrots with honey and butter. You can get very creative and add it to salads such as waldorf or even carrot and apple salad. I know that I want the flavors to stand out. And cinnamon is good for you too! You can also use in savory meat dishes.
Today, it’s widely known that cinnamon is harvested from the bark of tropical evergreen trees. There are two main varieties of the bark: Ceylon cinnamon and cassia. There is a very high oil content in cinnamon which produces a spice with a deep, red 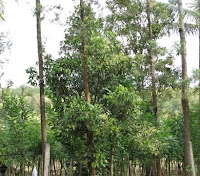 dish-brown color, intense fragrance and sweet, red-hot-candy-like flavor. I know that my "red hot" candy craving is cured when I pour on the cinnamon. I even have been adding cinnamon to hot water and adding honey. If you ignite the branch of the cassia tree native to Vietnam it will spark, that's how high the oil concentration is.
A Canadian Magazine, Weekly World News (1995 article) on Cinnamon and Honey says:
WEIGHT LOSS:Daily in the morning one half hour before breakfast on an empty stomach, and at night before sleeping, drink honey and cinnamon powder boiled in one cup of water. If taken regularly, it reduces the weight of even the most obese person. Also, drinking this mixture regularly does not allow the fat to accumulate in the body, even though the person may eat a high calorie diet.
IMMUNE SYSTEM:Daily use of honey and cinnamon powder strengthens the immune system and protects the body from bacteria and viral attacks.. Scientists have found that honey has various vitamins and iron in large amounts. Constant use of Honey strengthens the white blood corpuscles to fight bacterial and viral diseases.
END WEEKLY WORLD NEWS
I have been using Saigon Cinnamon from Costco that is amazingly intense, so different from the cinnamon that I have previously experienced. The intensity is remarkable and the flavor is distinct. It's about $4 for a 10.7 oz. container of ground cinnamon! Wow! Pour it on. And you know, even if they say use less, I say USE MORE! I am all about bringing out the distinctive flavors and really tasting what you use. You tend to eat less and have less cravings because you are more satisfied.
Cinnamon Cocnut Macaroon Crumble Recipe
2 cups unsweetened shredded flaked coconut
2/3 cup all purpose unbleached flour
1/2 cup (packed) golden brown sugar
1/4 cup honey or maple syrup
3/4 teaspoon salt
2 tbls. ground cinnamon
4 1/2 tablespoons chilled unsalted butter, diced (to make vegan use coconut oil, a little 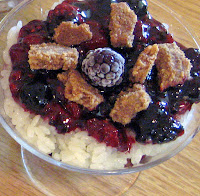 NOTE: you can use this for ice cream, pudding toppings, layered parfaits, or for nibbling! Freeze and enjoy.
Posted by Maui Fresh Chef at 8:42 AM 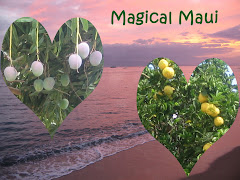 Maui Fresh Chef
Kihei, Hawaii, United States
Aloha from beautiful Maui, Hawaii. Come check out my website. www.MauiFreshChef.com. My menus are up. I also offer classes. After spending most of my life looking for a "job" I am choosing to do what I love, which is cook! I used to do it for fun and now I do it for fun all the time! Isn't that what life is meant to be about? Come and visit us and experience a culinary journey of the islands! Mahalo and Aloha from Maui! 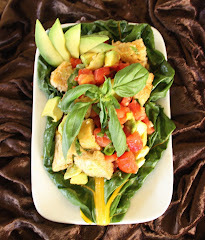 Enjoy the tastes of Maui